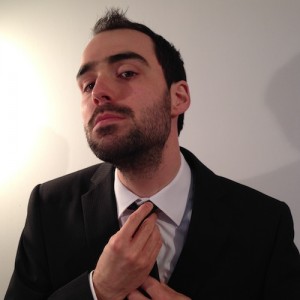 Chris is the southernmost of the Pouring Beans three and the one who is pictured with a beard. 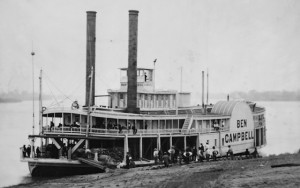 In 1887, a paddle steamer on the Mississippi departed St. Louis, bound for Memphis. On board was a woman named Tallulah Kinsey, a young floozy known around her hometown of Slipknot, Missouri as a one-time hussy and good time girl, who was now a magician’s assistant, touring with the Great Sombrero who was performing an evening show on the boat.

As night fell and the hot day turned to a stifling, airless evening, Tallulah Kinsey changed into her tutu and glittery stilletos and stepped onto the stage. Over the course of the evening she was sawn in half, had fourteen daggers thrown at her as she spun on a rotating wheel and was vanished into thin air to rapturous applause.

Tallulah retired in 1896, settling down with a poker ace named Big Johnny McGraw who she befriended on one of her paddle steamer voyages, and as she would no longer need her red travelling trunk, sold it to an itinerant gentleman named Cary Wilkinsop.

Wilkinsop was making his way steadily across the United States from his former home in Sickbag, Nevada to start a new life in the east. Tiring of carrying all his belongings in his big pockets, he was glad to stumble across Tallulah and purchase her red trunk, which made his slacks noticeably lighter. 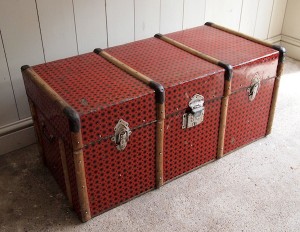 On reaching New York, Wilkinsop found his new life was not all he had hoped. After a year in the Big Apple, in which he failed to make inroads into the window dressing profession he so hoped to join, he decided to go further afield to somewhere he would be considered truly exotic and boarded an ocean liner bound for England.

When he arrived in London, Wilkinsop took his red trunk and his book of window dressing specimen swatches along the length of Oxford Street, hoping to find a grand department store that would hire him for his great skill and taste in eye-catching mercantorial showmanship.

He was turned down everywhere he went until at last he arrived at John Lewis, the biggest and grandest department store on London’s most famous street and one that would not actually be built for another forty years. It was here that he was just two hundred metres from the location where Chris goes to work most days.