I’m getting used to terrible albums mysteriously landing on my doormat now. I don’t know who sends them or why, but they keep on coming. Normally I’ve heard of the people involved – Vanilla Ice, Clock, that sort of thing, but I have to say I’ve never heard of Gary Wilmot before. I’ve searched the internet to no avail. He’s a complete unknown.

Still, here it is, a forgotten 80s classic: Love Situation by Gary Wilmot. 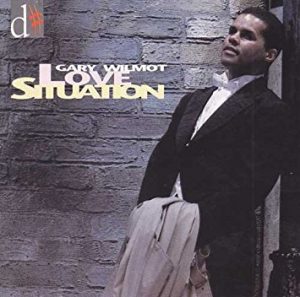 The feeling I normally get while listening to music for these Four Word Reviews is that I struggle to care about the music I’m hearing, but this album was an interesting first, because I got the distinct feeling that Gary Wilmot didn’t care either. I don’t think I’ve ever listened to an entire album of music in which none of the participants show any sign of giving a damn about the music they’re mechanically churning out.

Of the 12 tracks here, four are cover versions. The eight original songs are without exception awful, with the sort of lyrics that slowly and deliberately tell you exactly what the song is about so there’s no space for imagination or subtlety, but it’s not clear whether Mr Wilmot thought that he could genuinely improve on the four songs he covers or whether he’s just using them as a way to avoid having to write any more drivel. In any case, all four are disasters.

In terms of the music, it sounds like someone listened to “A Winter’s Tale” by David Essex and decided to make a whole album like that. There’s almost no sound on the whole CD that is not made by one of the instrument settings on a Yamaha keyboard, though there is a bit of Carpenters-style subdued electric guitar once or twice that’s turned right down so it doesn’t get you too excited. Several of the songs fade out over the course of thirty seconds or more, sometimes from the middle of a chorus, which gives the impression that the producer has had enough and is trying to wrap it up early.

Interestingly, after ten solid tracks of slow, quiet, bored-sounding crooning, the last two tracks suddenly pick up the pace, like a direct reversal of all those albums that have ten tracks of lively good stuff and then a couple of slow half-baked songs tacked on the end. Both of them are crap, but Danny You’re a Loser is almost the first appearance of any sort of beat, which is at least a welcome change if not actually pleasant listening, while There’s Only Room for the Good Girls might be a terrible song and a transparent pastiche of Billy Joel but is at least not more mushy, apathetic muttering over dreary keyboards. If they were the first two tracks you’d misguidedly think there was some hope for the album, so in that sense at least it is kinder to put them at the end.

In short, my favourite thing about this album is that it took four songs I already knew and didn’t like, and showed me how it would be possible to make them much worse, so that next time I hear any of them I can at least appreciate the fact that the originals are competently performed and that the singer seems to give a toss about them. My least favourite thing is that I still have no idea who Gary Wilmot is.