The Beans Home Shopping Network is delighted to announce a summer sale featuring MASSIVE REDUCTIONS on our innovative Non-Holiday Packages.

Introduced in 2020, when it became clear that nobody would be going on holiday ever again, our Non-Holiday Packages have been figuratively flying off the entirely metaphorical shelves. Read on to find out how it works.

END_OF_DOCUMENT_TOKEN_TO_BE_REPLACED

So many posts in so few days. It’s almost like it’s the end of the month and people have one eye on the Bean Counter.

No matter. This isn’t just any post, this is important. Listen carefully.

I am posting to the Beans from a foreign location. I am, literally, Trekkin’ Abroad at this exact moment. I am within a country apparently called Norman D., though as yet I have been unable to ascertain its surname. However, armed only with this rudimentary information, I’ve narrowed down some likely suspects.

An English footballer, who mainly played defensive positions, Norman Dodgin’s professional career lasted from the late 1940s to the early 1950s and he died in 2000.

An author, most famous for his 1915 book South Wind, Norman Douglas died in 1952 – interestingly, at a time when Norman Dodgin was at the height of his professional football career. A coincidence? Unlikely.

Confusingly born in Breslau, a German city that no longer exists because it’s now called Wroclaw and in Poland, Norman Dyhrenfurth was a cinematographer who produced movies for National Geographic in the 1960s and is apparently also known for a film released in 2007, which is two years after his death. He was born on May 7th, the same as me. Another coincidence? Unlikely.

Clearly these are the three most eminent Norman D.’s in the world, and so logically if I am in a place called Norman D. then I must be in one of them. All three are dead, which brings the unsettling but inevitable conclusion that I have gone on holiday to a corpse. However, it seems to be a reasonably nice corpse, with a pleasant apartment that has a balcony and a short walk to shops and bars around an attractive harbour front setting, so if this is life inside a dead body it’s not all bad.

I am due to leave this place on Sunday and if any further information about the location or identity of Norman D. comes to light, I will share it here.

I went to France again, this time for two actual weeks. I made a number of important discoveries to supplement the important knowledge I gained on my last visit.

I was hoping to gather more information over a two week period, but the French are a crafty people, and ensured I was plied with excellent beers, wines and artisanal ciders, so to be honest I don’t really remember much of it and the four points above are all I came away with.

Where’s this guy been? He’s been taking a month off, is the answer, choosing to suffer the ignominy of a nasty dried pea on the Bean Counter for the sake of enjoying a month free of the obligations of blogging and commenting. Those arduous tasks take their toll on a man, even one as handsome as me, and a few weeks away from it make all the difference. I’m back now, fully recharged and ready to write more glittering blog jewels.

If you want a more literal answer to the question “where’s this guy been?”, then the answer is Edinburgh.

Edinburgh is a city in Scotland, famous for the coldness of the weather, the vivid orange of the Irn Bru, the fakeness of the tartan sold in tourist shops and the whisky. The other thing it’s famous for is its castle, an amazing fortress sitting high atop a rocky mountain in the centre of the city, and though few believed me when I told them, it is made entirely of whisky.

I tasted it, and it was delicious. Then I went home. #tastinghistory #edinburghmems 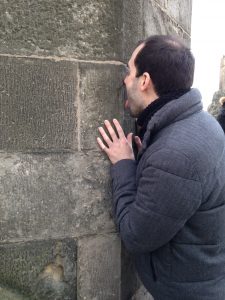 “Da da de something something da,” as the song goes, “viva España!” Well, I am in Spaiñ now and it certainly seems to still be viving tolerably well.

This is a flying visit to a far-off land, so in many ways my assessment of the country and its people may be hasty or perhaps based on an incomplete assessment of the facts. But I see no reason why that should stop me passing judgement on the place.

So far, the main thing I have noticed are the number of English people here. English people appear to be not only visiting, but also living here and running almost all the businesses. I am growing concerned for the safety and welfare of the 46 million people who are native to Spain because as far as I can tell they are not here and I find myself wondering where they are.

Aside from that, the weather here seems nice and it is easier to procure bacon sandwiches, beefburgers and a decent curry than in the UK, so on the whole this place has its upsides. The downside appears to be that, if we leave the European Union, we will also leave behind most of the population of England.

I have arrived in Italy, land of many very ancient histories, of pasta, of scooters, and of Europe’s most cheerfully remembered fascist dictatorship.

My surroundings here are extremely pleasant but I have to admit to being a little bit disappointed by the food in what is supposed to be the home of one of the world’s most popular cuisines.

It turns out that all food here comes from a shop called Gonad. I have to say that I am not altogether comfortable eating anything that has come out of a Gonad.

If that makes me narrow minded then so be it. If that makes me seem closed to the wider world and the glorious differences between our nations and our cultures then that is fine. I am simply not happy here knowing that every sip of juice is Gonad juice and every mouthful of tender, juicy meat is Gonad meat.

Revitalised somewhat by the single slice of ham fed down the side of the hatch by Chris, abandoned by Ian and his selfish demands for ham, and fearing that I may be losing what slim grasp of reality I had left, I steeled myself and set off back into the bowels of the land behind the hatch…

END_OF_DOCUMENT_TOKEN_TO_BE_REPLACED

Tomorrow morning I set sail for Greece. But what do we know of this far-off land of mystery? Until recently, perhaps only that everyone there was a god and they eat a lot of yogurt. But now it’s all over the news. Just look at some of these recent headlines:

With this in mind, I have taken the latest Foreign Office advice and will be taking all the money I will need in the form of cold, hard cash, in a range of denominations and currencies. In the event that the Euro is scrapped and Greece returns to the Drachma, I have spent several evenings drawing my own Drachma notes and will be taking those with me. I am also taking a considerable amount of yogurt in the hopes that I can use it to barter for basic goods and services.

I’m not sure whether this approach will be enough to see me through a holiday or even if I will actually survive the trip, but I will attempt to keep you updated when I return as to whether I am still alive or whether I have been confiscated by the Bank of Greece as a hostage due to the deteriorating state of negotiations with the European Union.