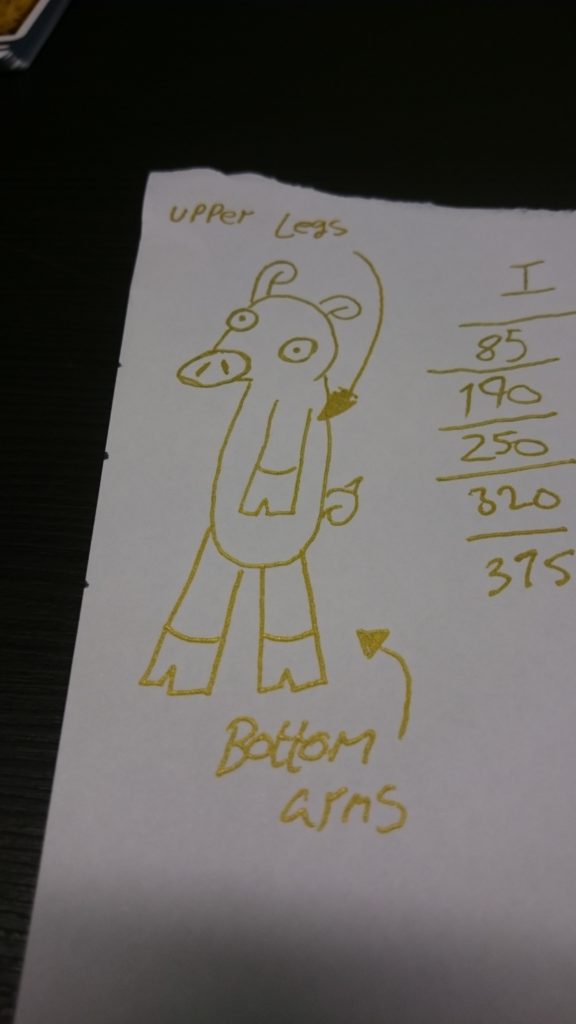 How many legs does a pig have?

If you answered ‘four’ you are wrong.

How many arms does a pig have?

If you answered ‘none’ you are wrong.

After a recent night of board game fun with my fake adopted family, Reuben took some time out between rounds to draw another of his award-winning designs. The fact that he can crank these out for fun whenever he wants emits equal levels of pride and jealously from my insides. He originally drew the pig with no legs. After a discussion with the rest of the table, it was decided that pigs do not have four legs in total. They have two upper legs and two bottom arms. That is how it is now and will forever continue to be, and anyone who says otherwise does not have the same high level of anatomical knowledge that we do.

Well, wasn’t that a nice May? It may (huh huh) have passed rather quickly but it’s fair to say that we all had a smashing time regardless. What did we learn?

We learned a lot about automobiles thanks to the super brain of ocular octogenarian Smidge Manly. Chris finally learned that he isn’t actually any relation to Kelly Jones and is in fact somehow part of the wind family. What kind of crazy reunion will he have later on this year? Can I manage to get past this section without a wind-based pun?

Kevin learned that continually not posting on the beans will leave him with a shameful string of dried-up peas. This kind of legacy is not a good legacy for loved ones, and the gif of the Changlet shaking his head in despair will remain at the back of his mind for decades to come.

I did not learn a thing. What I did was set myself umpteen challenges without properly considering the words that were coming out my mouth and through the tiny letters on my phone. It does mean that I have a full list, chocked full of nonsense, to keep me occupied during those warm summer nights.

Reuben learned that being hit with a cricket bat really sodding hurts. Audrey learned not to leave Reuben and I in charge of her flat when she goes on holiday, for fear of returning to pickle-based games with no clear end to them (which she did, for when she went away the second time this month she got her brother to keep an eye on it). At least one of us is learning.

Take a deep breath. By the time you let it out its already be June.

This is Beaver Ian. 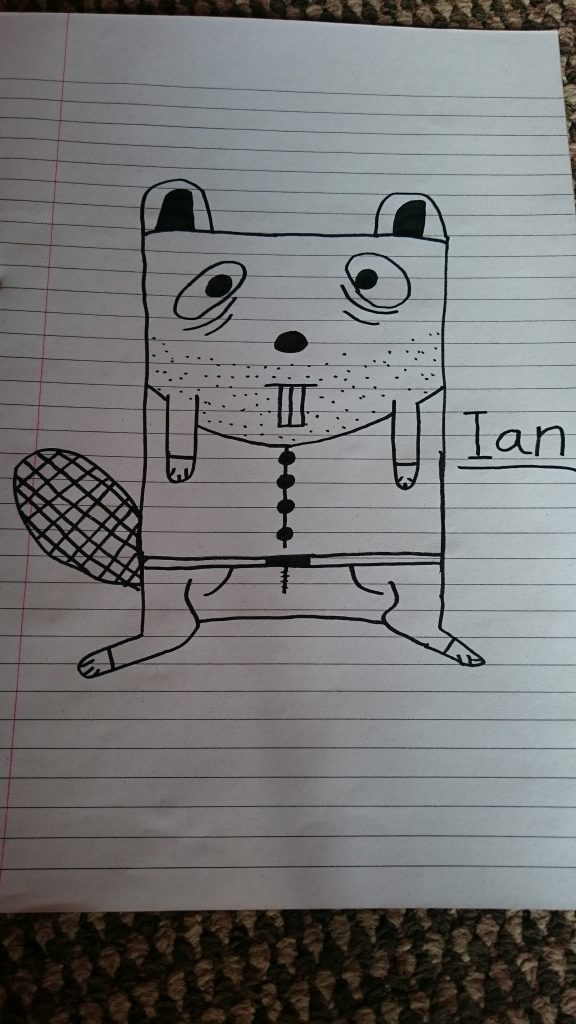 It is me re-imagined as a beaver. You can tell that it’s me because it looks like me, albeit with beaver characteristics. I am often caught with a Walter Matthau hang-dog expression on my face and five days out of seven can be seen wearing what resembles a suit, and pretending to be an adult.

This re-imagining was drawn courtesy of Reuben. This is officially the best drawing of me ever and is practically on the same level of dedication and excellence as the drawing my niece did of her dad with penises for hands.

I only wish I looked as good as Beaver Ian.

So what happens when everything goes right? Everyone is happy? Thrilled that there hasn’t been any problems? Of course that’s what people want. If it goes right then you get an easy life.

What if you wanted more though? What if right was just plain wrong? What if wrong was exactly what you were looking for, then what? Then what indeed. In the absence of a drum roll I present to you…

I think if things need to go wrong then they should do within a controlled environment. The drawings above are the results of hours and hours of research into the phenomenon of what should be and what actually is. Myself and Professor Reuben took to the old pen and paper to try and explain to the world the concept behind Wrong Kittens.

On the left you will see a rather chunky feline performing a handstand wearing high heels shoes. The gender of the cat is not important, it is more that anyone who tries to perform such a dangerous manoeuvre should not do so adorning delicate footwear. That is wrong.

On the right you will see a much smaller animal with a look that could scare the sheep out of Lincolnshire. It is more like a devil, or some ancient cave painting, depicting a surprised yet potentially evil kitten. Its tongue hangs out carelessly. What is it staring at to the left of the picture? It’s much more wrong.

We welcome anyone else’s efforts at drawing Wrong Kittens. The sky’s the limit, and there are more to follow in due course.

This year Audrey asked for a copy of ‘The Lady in the Van’ on DVD for Christmas, the film based upon the book by Alan Bennett. It was a bit of poor choice really because the film is being shown on terrestrial television for free on Christmas Eve. Nevertheless, prior to being in receipt of this important piece of information, I still went ahead and purchased a copy. Neither I nor Reuben have ever read or seen ‘The Lady in the Van’ and so we decided, based upon the front cover of the DVD, that we would guess what the story was and write and illustrate our own version as an additional present.

The end result was, quite simply, amazing. I cannot for obvious reasons include a copy here for fear of spoilers for the intended victim, I mean recipient.

What I can include though is a piece of concept art that Reuben came up with during the development process. He decided that the story should involve 80’s martial arts hero and general good egg Chuck Norris and thus drew a picture of him. This was then improved by adding three dimensional eyes. 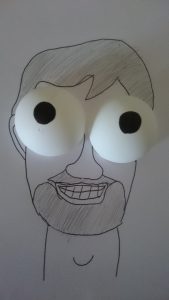 This is how we know that we have another world-changing format on our hands. “This Way Up”, the incredible sketch comedy from Newcastle-based comedy chumps Ian and Roo, reaches its fifth episode and the fans must surely be feeling just a little anxious that there is only one episode to go before it vanishes from the airwaves forever.

For now, though, let’s just be grateful for what we have, as we listen in to episode 5 of This Way Up, featuring the incredible sound of Ian rapping.

If listening is not enough, and you simply must own it for yourself, you can also download it.

(Two posts in two days! Who does this guy think he is?)

Series 2 of This Way Up is on its way and Pouring Beans is proud to present you with the next episode of Britain’s most innovative radio sketch show, featuring the Sean Connery Accent Watch and slightly more cranial inflation than is technically permitted by Ofcom.

And if you wish to keep hold of this episode to treasure it forever, we suggest you download it.

Reuben approached me last weekend because he had recently had a dream that had perplexed him and needed to know what it meant.

This is mostly his dream with details but with a smudge of embellishment on my part:

“Reuben is walking around school with his new fictional best friend, Daniel. They had decided to walk back home through the woods once the school day was over. The woods, though dark, were still light enough to be unthreatening. They had gone halfway through when they heard a strange noise and a bright blue flash, and stood at the base of a tree was a beaver.

They tried to get near but each time the beaver disappeared and reappeared in a different part of the woods. Sometimes the beaver would appear in different attire, and in particular as a Mexican. Reuben and Daniel split up and in doing so, one of them managed to grab the beaver. As the other approached, the bright blue light flashed and they had magically been transported to ancient Egypt.

It was at this point they realised it was a magical, time-travelling beaver.

The animal was tired; time-travelling is a very tiring experience. The only way to re-charge the beaver was to feed him a particular type of wood. Once this was done, Reuben and Daniel had to try to convince the beaver that they needed to go home, which was difficult because the beaver was worshipped as a God in this period of history.

After a fair amount of tussling, the beaver accidentally transports them to the post apocalyptic world of 2704. Then, through a series of mishaps, they also take in the sights of the Jurassic era, the Romans, pirates, Aztecs, Victorian era Britain, World War II and the 1980’s.

Eventually though they get home and decide to keep the beaver as a pet. It turns out he is called Harold. His full name is Harold “Carrot” Bevoid. In his time he drives a Beaver Delorean. His time is not specifically mentioned so they do not know what year he has time-travelled from.”

Something to do with puberty perhaps?