Pack your bag, grab a coat and head off with me to a mystical place, a place where only the brave may date to enter and only the fiercest survive. If you have the courage then perhaps you will make it to the very peak of n’cle.

In all honesty, I’ve never been to n’cle. It’s clearly listed on a lot of signs around here but whenever I head in the general direction it disappears. It is as though n’cle is more of a concept than anything else, it’s a state of mind. You don’t go to n’cle because you’re either there or you’re not. You can’t get there if you’re already there. Yeah, something deep and meaningful like that.

I have dreamt of hiring a helicopter and flying closely over the terrain in the hope of finding a physical, tangible thing. Perhaps n’cle is so small that only the locals know where it is. Perhaps it’s a stump in the middle of a dell, or a well, or a part of Hadrian’s Wall with a bad smell.

These are all theories though and none of which get me closer to n’cle. I will forever be chasing it, desperate to taste it, smell its goods and embed myself within its warm embrace. Embed? Definitely embed.

Having spent a good five minutes looking at this, just what the hell is this? 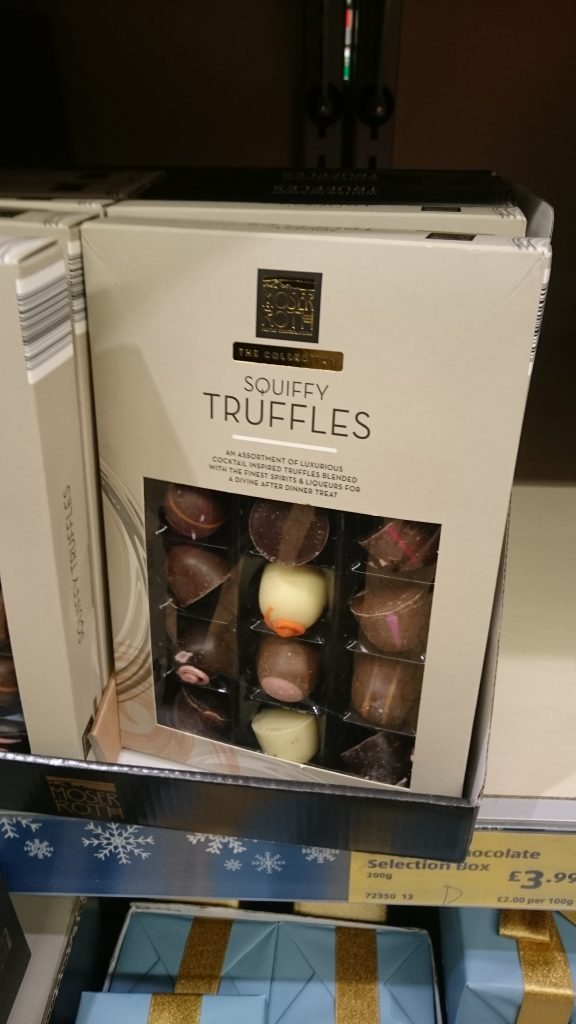 Truffles I get. Commerce and purchasing items I get. Walking around in supermarkets taking photos of curios and novelties I get. But squiffy truffles? Can you describe a truffle as ‘squiffy’?

Were it not for the fact that my phone recognised the word ‘squiffy’ without much input from me, I would be inclined to start screaming about why such a word should exist and who the Ben Nevis is actually using it in polite conversation or any conversation at all?

I used the word once, maybe twice, in my whole life of lives.

Would you eat a squiffy truffle?

This right here, is a world exclusive. I know technically (and actually) all of our posts are world exclusives, but some of them just feel more worthy of the title than others, that’s all I’m saying. And what I’m saying is that this is one of them.

EDIT: You can now subscribe to all of the wonderfulness in iTunes: https://itunes.apple.com/gb/podcast/pouringbeans/id1202597817 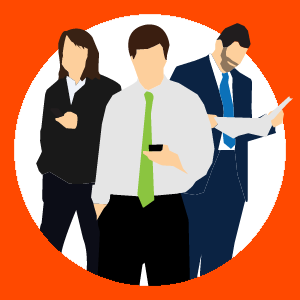 Oh hi. I didn’t see you there. Well, seeing as you’ve already jumped over the 8ft high chain-link fence, snuck past the security guards and dodged all the bear traps I left in the lobby you can stay.

We are currently shooting fresh scenes for ITV2’s newest fly-on-the-wall cum soap opera ‘Nana Nanas’ about a group of bananas who join the police force but can’t help get into the strangest and yet also thought-provoking scenarios that reflect the problems of everyday people and everyday life. The only problem is that the cast have a lifespan of about seven days which means that we are constantly having to recruit new actors to fill in the roles. The new actors are given new roles meaning that there is a constant revolving door of bananas starting out, breaking through and retiring within the space of a week. It is a constant headache for the writers who have only been doing this for the best part of a month but are running out of ideas for new characters.

You should also not confuse ‘Nana Nanas’ with ‘Nana Nanas’, which is a coming of age documentary about retired bananas trying to start fresh careers in the twilight of their years and something completely different. 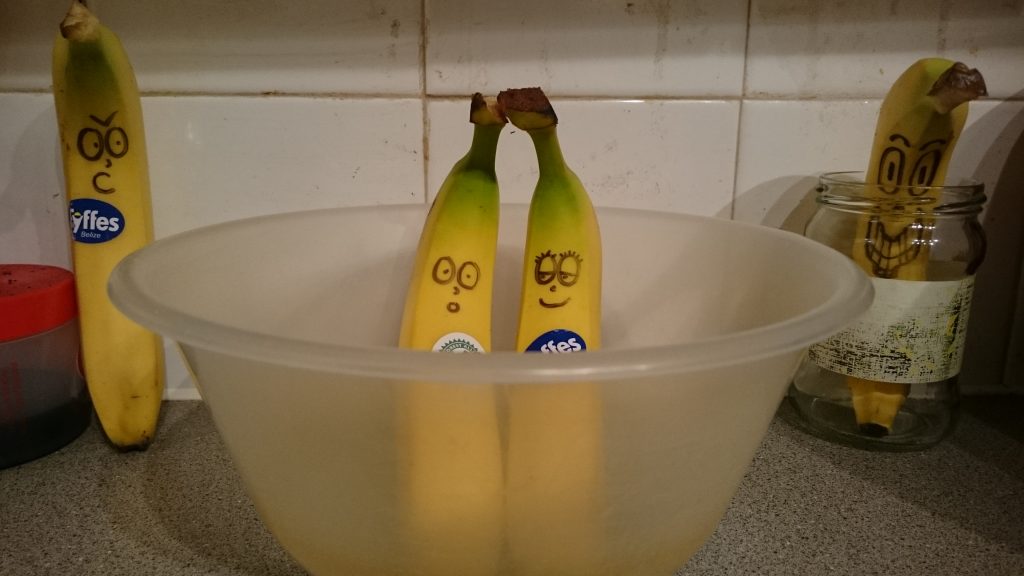 Here you can see young heart-throb Jacob and seductress Cleo indulging in a sexy hot tub moment after a busy day shift. Jacob is in two minds about the whole thing, given how Linda stopped him in the corridor at the station to tell him just how she really feels. Cleo has had designs on Jacob since the last episode and has finally found the chance to make her move. Meanwhile Cleo’s dad, who also happens to be the chief superintendent leader police person king man, has followed them to Jacob’s flat and is furious that his star officer is fraternising with his daughter. As the chaos ensues, notorious, as in for the last two episodes, sex addict and pervert next door neighbour Shonky T. Nuisance looks on, hiding in the corner pretending to be a particularly unconvincing corner lamp.

I know what you’re thinking, and you’re right that it is very little work that results in a huge amount of reward. But isn’t that most of ITV2’s programming schedule?

Guards! Please escort this ruffian off my set, thank you.

Around the world, every single day, remarkable people are creating remarkable new things, making their ideas and innovations a reality. And since the start of 2016, Pouring Beans Productions has been sending its reporters out to meet some of those people and catch a glimpse of the exciting inventions that are in development.

In this episode of Things!, Dougie McLaughten meets a man from Banbury who hopes to revolutionise the way we buy petrol and other inflammable spirits.

Due to a distinct absence of Kevin and Kevin-based products it now falls upon Chris and myself to fill in the blanks. I’m not very good at grooming poodles or doing up houses so this will be a lengthy and painful process.

I’m also really rank at doing IT. I did an IT once and the whole office didn’t recover for six weeks. I don’t get to do an IT anymore.

Instead let’s hark back to a time before all of this guff. A more simple time when I would spend most weekends levelling up my characters on ‘Secret of Mana’ on the SNES and crying about girls, or a lack thereof. Kevin, meanwhile, was off living it up big style. Not only had he managed to do his face in on a holiday to Greece with Tom Cruise lookalike and badger enthusiast Mr T Matthews, but he also was holding down a sweet job in Monkey Maze and beating up crims as his crime fighting alter ego, The Malevolent Pen.

With all of this going on you’d think he wouldn’t had had time to keep up with the latest fashions, the hottest beats, the sweetest sounds. Well you’d be wrong. Many a time did I go round to his house to find him pulling shapes to THE song of 2002:

He played it constantly. This was his jam and nobody else’s, and if they tried to make it their jam he threw them into a canal. I saw him do it; it was brutal.

There was a time where each time I would call him he’d be sat in a car outside DJ Luck and MC Neat’s recording studio in the hope of catching them and getting them to sign his test vinyl pressing of the song.

I know there will be a large pool of people who won’t believe this because after his endless posts about Status Quo it’s hard to imagine him not wearing a pair of jeans and a ponytail and being chased around by a shit Simon Pegg double. Yet, with my hand on my heart and my leg in the furnace, I can tell no lie.

I wonder if he still plays it now, in the dark, quietly, as his child sleeps. One day Tiny Mountain might wake up as the sun gently caresses his face and he’ll turn to Kevin and his first word will be, “Irie!”

I hope so, guys, I really hope so.

Sometimes it takes a single person of extraordinary vision to show the world what it has been lacking, and in a single moment, change everything. Sometimes that unique talent is a leader, who brings peace and harmony to a divided people; sometimes it is a businessman who can build a global corporation based on benevolence and the improvement of human lives.

Sometimes it’s a man called Henry from Oxfordshire who has invented a box that can do, literally, everything.

In the third episode of Things!, Alan Rudge meets that man and his amazing box.

You are applying for a job.

There are several other people in line for the position but so far, without realising, you have been the strongest candidate. When the interviewer looks away you quickly wipe the sweat from your brow. Someone has left the heating on; you think it’s a deliberate ploy to put you under pressure.

It all comes down to the last question, which is separated into two parts:

A) You are passing through a popular field. All of a sudden you notice a horse, on fire, charging towards you. You do not have enough time to run away. The flaming horse is going to collide with you unless you do something immediately. You do not have any weapons or tools at your disposal. What do you do?

B) You are passing through an unpopular field. It’s all dirty and marshy. All of a sudden you notice a horse, on fire, charging towards a small group of zombie children, who are also on fire. They are going to collide unless you do something immediately. You do not have any weapons or tools at your disposal. You cannot leave the situation as it is and walk away. What do you do?

Your answers will determine whether or not you get the job.