Today I had the day off work, and we actually went out! We went out for lunch, do you remember that? I barely do. Being able to go out for lunch.

Well we had to drive all the way to Harrogate to do it because we fancied going to Wagamamas and that was the nearest one that was open, but it was almost, almost, like the before-times.

That, and all the waitresses were dressed as surgeons, and there were screens on the tables, but it was almost like the before-times.

Oh, and you had to pay by using your phone via a website because despite bringing us drinks and food for an hour or so, holding the card machine for us to beep would be just too risky, but it was kind of like the before-times.

Aaaand they only had a limited menu, because… reasons, but it was a bit like the before-times.

OK so it was nothing like the before times, but we had a child free lunch out in a nice restaurant with nice food and the weather was nice.

Today I had a nice day.

You will never believe what just happened to me! The short version is that I am currently being paid to not work. I am at home right now not working. If I try to work I will be shouted at profusely so I am sat not working on a beanbag listening to the radio.

The year 2020 has been a strange one so far and it continues to get weirder the more we slide through it. The outside world is still there, I can see it, through the big windows in the living room, and it looks fantastic. I reckon that for the moment I am going to stay here and admire it from afar. Besides, it looks a little chilly and I’ve got this patch of dry skin on my hands that the low temperature will not do any favours for.

I have decided to try and do one drawing, sketch or doodle a day for something to look forward to and possibly upload on Twitter (the Book of Faces does not deserve my “talents”) for the world to admire. I hope to have a wall of my efforts with which I can look back on and laugh slobbily, possibly sell to some passing rich aristocrat (they’re always using the footpaths round here) and then retire to the country, doing the same thing I’m doing now, but with a little more style, panache and some hot ladies in a hot tub serving hot drinks.

Look at me and be inspired.

We’re all on the lookout for a flexible workspace these days. Somewhere you can just sit down, maybe order a latte, open your laptop and, I don’t know, edit a podcast or grow a hipster beard or something.

The other day, while exploring an area I hadn’t visited before down in the sub-basement of the 1930s part of the building at work, I found an excellent flexible workspace and wanted to share my find with you. Here it is.

Obviously I’m claiming first dibs on this, and will be moving in there first thing Monday with my laptop to grow a podcast and edit my beard. But if you want to book a slot yourself, just get in touch.

In my new job, I work on the third floor of an old building that has many useless architectural accoutrements and doodads. They’re all things the architect thought would look nice back in 1932, but which now serve no purpose at all, and perhaps they never did.

It doesn’t look to me like a balcony that I was meant to go and stand on. It’s not very wide, for a start. You could stand on it, and walk along it if you weren’t planning to swing your arms about too much, but you couldn’t put a chair of any kind there, at least not in such a way that you could actually sit on it. The wall along the edge is only just waist high, so you’d feel a bit exposed on it as well.

None of that means that I don’t want to stand on it. Unfortunately, I can’t, because none of the windows open wide enough and the doors – we have two sets of double doors that would open on to it – are locked. The doors are also blocked by some furniture and other piles of tat.

I don’t know why I want to stand on the balcony so much. It would be cold and unpleasant and dangerous, and there would be nothing for me to do once I was out there. There’s no good reason to stand on the balcony. It’s not even a balcony for standing on. That’s why the doors are locked. They aren’t doors for walking through. But none of that changes the fact that I want to stand on it, just for a little bit, just to say I did.

One day it will get the better of me. One day I will climb out of the window. And on that day you will know I made it because you won’t hear from me for a long time, and it will be because I got stuck on the balcony you’re not meant to stand on, and had to be rescued by the fire brigade. And it will be worth it.

I think I’m on to something big here, but I want to know if you think it’s marketable *finger window*.

I moved to Ruislip back in August and immediately noticed that this large and important suburb was entirely missing its own superhero. I have decided it is my civic duty to fill this clear gap. I am, therefore, going to transform myself into… Ruislip Man. 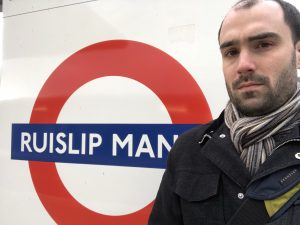 Hopefully, once I’ve saved a few old ladies trying to cross the street and rescued a few cats from trees, Ruislip Man will be a household name, paving the way for a lucrative range of spin-off toys, stationery and action figures.

Incidentally, I’m now recruiting for a sidekick. Let me know if you’d like to apply and what your suitably suburban superhero name would be.

Kareech looked at the ground. Sitting there, isolated from the rest of the bunch, was a singular key. For some reason Kareech always assumed that keys traveled in groups rather than by themselves.

The key shone in the mid-morning light and in it was reflected a distorted, bendy view of the street he currently stood in. There was nobody else around and so, with nothing much to lose, Kareech bent down in the incorrect fashion and picked up the key. It was much smarter than it should be; there were marks along the long edge, little nicks where the key must have been used to open a parcel, help with a struggling tin opener or possibly used to pick food out of an old woman’s teeth. No discernible indications as to whom owned the key or where it should be left in case of emergencies.

It was Sunday, the lazy day, the day for not doing much. Kareech had a very limited ‘to do’ list; other than picking up some salt for his mum and tying his shoelaces that was it for him. The world does not expect much from a fourteen year boy.

At first he left the key in his pocket, to jingle against the metal fixtures of his sad, faded foldy out velcro wallet. Maybe next year he will get a proper wallet rather than something that resembled a permanent reminder that adulthood was still way too far away. At the top of Evershed Terrace, however, he stopped to take in the brisk air and his hand grazed the intimate sides of the key. It was then that he made a decision, a decision that would ultimately change his Sunday and make it the kind of Sunday that he would look back on as an old man and possibly point a pipe up into the air, desperately trying to remember what happened.

You are applying for a job.

There are several other people in line for the position but so far, without realising, you have been the strongest candidate. When the interviewer looks away you quickly wipe the sweat from your brow. Someone has left the heating on; you think it’s a deliberate ploy to put you under pressure.

It all comes down to the last question, which is separated into two parts:

A) You are passing through a popular field. All of a sudden you notice a horse, on fire, charging towards you. You do not have enough time to run away. The flaming horse is going to collide with you unless you do something immediately. You do not have any weapons or tools at your disposal. What do you do?

B) You are passing through an unpopular field. It’s all dirty and marshy. All of a sudden you notice a horse, on fire, charging towards a small group of zombie children, who are also on fire. They are going to collide unless you do something immediately. You do not have any weapons or tools at your disposal. You cannot leave the situation as it is and walk away. What do you do?

Your answers will determine whether or not you get the job.

These are dangerous times. Terrorism is literally everywhere. Just yesterday I had to take the bins out when the bin bags were only half full because they had terrorists hiding in them. Last Thursday, I went back to a tub of half-eaten strawberry yogurt in the fridge and found that terrorists had eaten the rest of it.

To the untrained eye, everything is normal here in the safe, fairytale world of The Beans. Posts keep appearing, obscure in-jokes keep being mentioned, and everything seems normal.

But everything is not normal.

If you look closely at the most recent comments, you’ll see a theme. You’ll see that they are all by me and Ian. Why? Where is Kev?

The only sensible conclusion is that Kev’s login details have been hacked by terrorists and are now being used to terrorise innocent people. It’s possible that Kev himself has now been infiltrated, and is being used to spread fear and terror. Who knows – it might have been Kev who broke into my fridge and ate my yogurt. I think it probably was. The bastard.

This must stop, and I propose a two-step plan.

The first step is that we must improve our security systems, and for this reason both Ian and myself are being issued with black briefcases containing complicated equipment and wires and flashing LED displays with numbers on them. These form part of a new high-security login system to make sure that our login details are never compromised by the forces of terror, and also look really cool like we’re in a film.

The second step is that we will destroy Kev in a controlled explosion in a field near Bracknell this Friday afternoon. I know this will not be popular, particularly with Kev himself, but I think he would have to agree that it is for the good of the nation.

All those in favour, please raise your hand in the comments section.