Back in April, we learned that Mrs Miggins was redeveloping the heart of her enormous property empire. 75 Farringdon Road, the fine property where either Ian or I fell head over heels in love with the lucrative old crone, had the builders in.

I’ve been back to see what she’s done with the place, and I have to say I’m shocked. Take a look for yourself.

A respectable office building, you think to yourself. A fine example of the tasteful architecture and prime locations that have made Mrs Miggins the property magnate she is today.

I thought so too. But then I noticed something. Have you seen it? Look closer.

There it is. Miggins has handed her shiny new building over to Richard Sisskind of the Crossland Otter Hunt – the only UK hunt that chases otters across land and, presumably, then kills them in horrible ways.

Otters don’t deserve this. Otters are lovely. And I demand to know why Mrs Miggins – once the love of my, or maybe Ian’s, life – has taken on this brutal new pastime.

One thing is for sure. We will not be moving the Pouring Beans office to 75 Farringdon Road. No need to send me those fivers.

You have to pay the toll. That’s the way it works.

In order to get past you have to stump up the money or whatever is needed. You have to satisfy the teller to avoid salmonella. You must grease the wheels to sort out your shady deals.

I am about to venture down South towards the magical, Icelandic borough of Royskopp in order to meet Sheriff Rockingham himself. I have heard terrible, terrible rumours of the gentleman who he currently lives with though. Hushed tones have informed me that Steve Steveingtons is a violent wretch. I once sent him a Superman t-shirt which he loved with all his heart. One day he wore it to the pub, somebody accidentally spilled some lager on it and the authorities are still finding bits of people weeks later, scattered around the neighbourhood. A man with a temper like this needs to be appeased.

So what do you do? I understand that Steve Steveingtons is a big fan of the Trek through the Stars, something from television. Biggles maybe? I have been daydreaming about weird things mashed together and this keeps popping into my head at work. I don’t think my pedestrian drawing skills have done it much justice, and it doesn’t look anything at all like the one in my mind, but I hope that it is enough to stop him knocking me literally into next week. 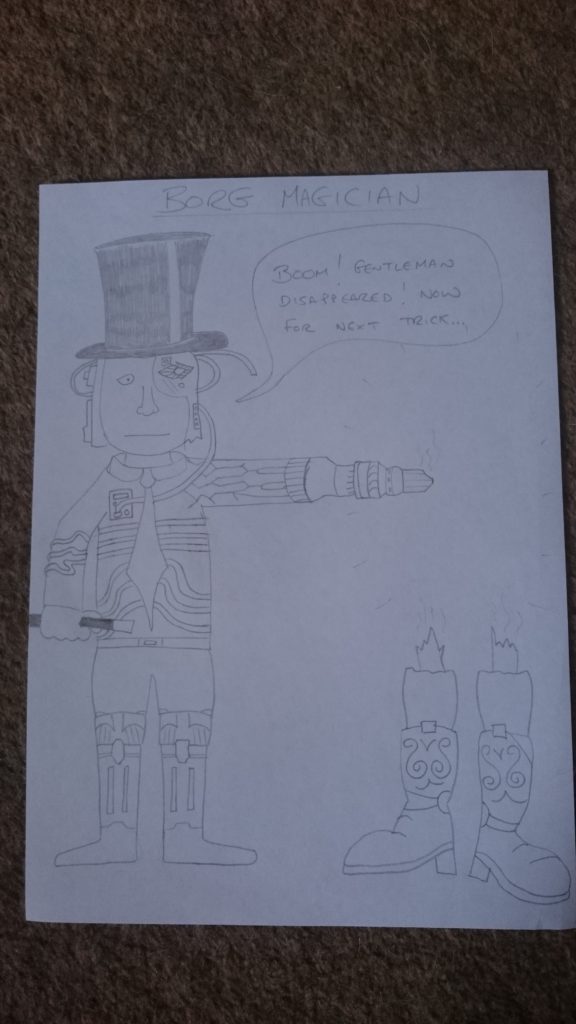 If this should be my last post let it be known that I regret nothing, not even all the Beans comics I wrote.

I’m not quite sure what the marketing team at Mars had in mind for this one….

I can only assume from this packet of m&m’s eggs that Yellow m&m and Pink m&m Egg were love rivals for the affections of Green m&m Egg, and that for some reason Yellow has seen fit to slaughter Pink splattering himself and Green in the blood of his rival.

Do you think they picked up on the start of the Easter story, the bit where Jesus gets killed, and not bothered reading on to get to the more traditional ‘re-birth’ bit?

Christmas is nearly here. The season of eating a bit too much and feeling very full all day and still somehow continuing to eat Celebrations all afternoon. The season of Many Desserts.

This is the Christmas Dessert War. Pick a side and choose your favourite. Only one can survive*. 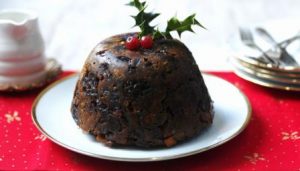 I choose Christmas pudding with brandy sauce. And if you don’t want any I’ll have yours. 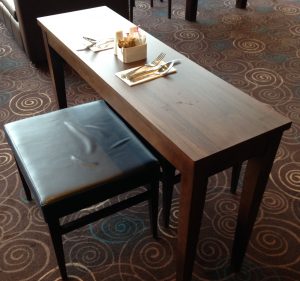 I’ve been worrying about this for literally years.

Some time ago – I don’t know, let’s say in 2011 or 2012 – I was in my flat and I was multitasking. I thought myself pretty cool at the time. Task 1 was sharpening some kitchen knives by swiping the blades through my little knife sharpener thing. Task 2 was watching something on TV – chances are it was QI XL on Dave. I could literally do both those things at once. I was amazing.

To achieve this state of advanced productivity, I positioned myself in the kitchen of my flat, facing the TV, using the backrest of the sofa as my workbench.

Some time later – weeks, or months maybe – someone came over to my flat and asked me “what are these?” I followed their gesturing hand and found that the “these” in question were a number of incisions – knife wounds, no less – in several places on the top of the cushions at the back of my sofa.

I have been silently wondering how the seemingly inevitable conversation would go, and whether leaving it until I moved out, years later, would make things better or worse. Do I plead ignorance? Or do I admit everything and hope that honesty is the best policy?

Last week, fortune smiled upon me. The people moving into my flat after me will bring all their own furniture. They don’t want a sofa. Our new flat is unfurnished and we need a sofa. My landlord has a sofa that they no longer want.

And so I now find myself in legal possession of the cosmetically-damaged sofa, without having to explain its slightly damaged cushions to anyone, and having got away with my careless crime scot-free.

These are dangerous times. Terrorism is literally everywhere. Just yesterday I had to take the bins out when the bin bags were only half full because they had terrorists hiding in them. Last Thursday, I went back to a tub of half-eaten strawberry yogurt in the fridge and found that terrorists had eaten the rest of it.

To the untrained eye, everything is normal here in the safe, fairytale world of The Beans. Posts keep appearing, obscure in-jokes keep being mentioned, and everything seems normal.

But everything is not normal.

If you look closely at the most recent comments, you’ll see a theme. You’ll see that they are all by me and Ian. Why? Where is Kev?

The only sensible conclusion is that Kev’s login details have been hacked by terrorists and are now being used to terrorise innocent people. It’s possible that Kev himself has now been infiltrated, and is being used to spread fear and terror. Who knows – it might have been Kev who broke into my fridge and ate my yogurt. I think it probably was. The bastard.

This must stop, and I propose a two-step plan.

The first step is that we must improve our security systems, and for this reason both Ian and myself are being issued with black briefcases containing complicated equipment and wires and flashing LED displays with numbers on them. These form part of a new high-security login system to make sure that our login details are never compromised by the forces of terror, and also look really cool like we’re in a film.

The second step is that we will destroy Kev in a controlled explosion in a field near Bracknell this Friday afternoon. I know this will not be popular, particularly with Kev himself, but I think he would have to agree that it is for the good of the nation.

All those in favour, please raise your hand in the comments section.

After we premiered the first episode of Things! last month, it’s starting to look like this series might be the hot new TV property for 2016. Already we’ve had enquiries from prestigious TV stations in Yemen and Herzegovina about buying this lucrative format.

For those of you wishing to see the series in English, here’s episode 2, in which Dougie McLaughten meets a shy and retiring man who has solved a very particular problem.